We’ve seen several dogs online sing. But this one sure stands out and his name is Happy.

Happy, believe it or not, makes a living out from his love of music! He sings alongside his dad, Kim Huia in the streets of Queenstown, New Zealand. And just recently, he has become an internet icon after a video of him with his human, all consumed in the beat of their song, got posted on social media. 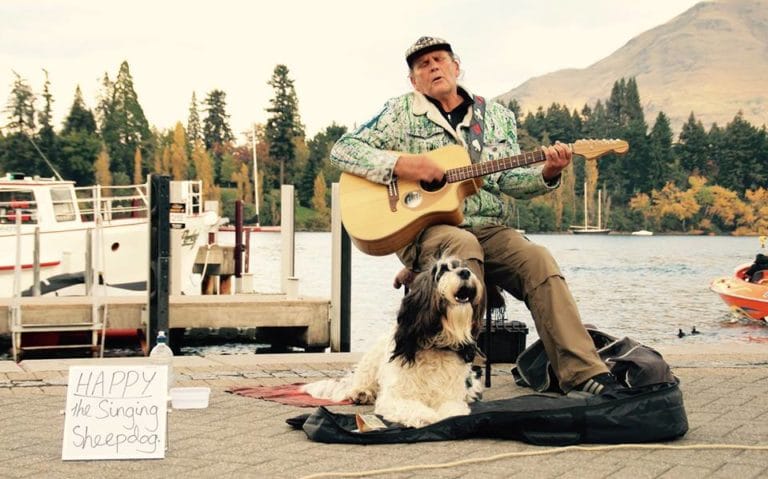 The clip was uploaded on a Facebook page by a passerby who says she thought it would have to be shared with others. And sure it is as it did not take long before other people on the internet took notice and began sharing the video too.

Well, it really couldn’t be helped. This duo is just excellent!

When they both sang along to the tune of the guitar, you could feel as if they are in their own world, totally lost in the music! And all the while, you’d also sense that feeling of content, as they do seem to be just so comfortable with each other.

We’re sure they don’t even consider this work. They perhaps only look at it as a pastime. And this also must be why everyone is so drawn to them!

With a lot of people now flocking their town to see their performance, Kim shares he is still in disbelief. He didn’t think it would be a huge thing for others as he only brought his pup with him out from the need to keep him watched.

Right now, he feels just glad that he decided to bring Happy along with him because, if not for it, he wouldn’t have found that his best workmate has just been with him at home all this time.

Indeed, dogs can never fail to surprise us. So we hope that just like this dad, others too would give their pooches the chance to showcase their gift! One common challenge that dog owners have is that their …